After waiting for more than a year, Honda has finally announced the new Honda City sedan. One of the most favorite sedans on the country, the fans have been waiting for years for a new model. While we do have this good news, it does come with a slightly bad one as well.

Honda previously released a lot of teasers and shots of the new vehicle in the dark. So, it was obvious that people would assume that Pakistan is finally getting the 7th generation of Honda City. However, the company has announced that a new generation is in works for the future, but not yet.

However, that does not mean we are not getting a new model this year. Honda has made some changes to the vehicle. Here is what you can expect from the new Honda City and what are the new features that are a part of this legendary vehicle.

The five variants of the new City sedan will be:

Here is a breakdown of the engine options.

While the brand has not announced the actual price of the new Honda City, the sedan is now available for advance booking. The standard variant of the new sedan can be booked for Rs. 1 Million where as the Aspire variants will be available for booking with Rs. 1.2 Million. You can book your sedan on 17th May. The actual release date of the sedan will be announced soon. 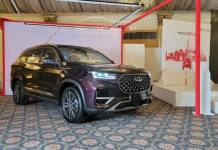